Born Of A Need: The History of Geist Reservoir (Part 1)

For the first 120 years of the history of Indianapolis, the northeastern corner of Marion County was mostly quiet. This portion of the county, well away from the donation lands where the capitol city was steadily growing, was characterized by the survey correction dog ear, farms, and the valley of Fall Creek, which flows southwest towards downtown.

The small hamlet of Germantown, founded in the early 1830's by Germans settlers on the north bank of Fall Creek, sat astride the county line between Marion and Hamilton counties within the valley. The village at its peak boasted several homes, a post office, and a mill. Farther downstream were other mills, using the waters of Fall Creek for power. Dozens of other homes and farms dotted the valley, and several bridges spanned the creek. Farther south was the small community of Oaklandon (or Oakland), southwest was the future site of Fort Benjamin Harrison, and the rest of Lawrence Township. To the north was Hamilton County, the area which would become Fishers, and farther north, Noblesville.

The photos below from the Map Indy website, show the site of Germantown in 1937 (left) and 2019. Germantown is the group of building around the "J" shaped roadway, and just north of Fall Creek. The remains of the smaller set of buildings on the right side of the 1937 image can still be seen in 2019, adjacent to the small island. Also, note the drawn lines on the 1937 map which depict where dry areas would be following the construction of the future Geist reservoir.

By the advent of the 1920’s, change was coming to the Fall Creek valley. Indianapolis was growing, and with it, the demand for water. The northeastern part of the county would be at the center of this demand. At the time of World War I, Indianapolis’s water supply was drawn from the White River via the Central Canal, Fall Creek, and various wells. However, the Indianapolis Water Company ("IWC") foresaw that in the future these existing sources wouldn't be able to meet the demand of the city, and began to look for solutions, including the potential use of impounding reservoirs.

At this point, Indianapolis had no surface reservoirs. In the 1860’s a reservoir at Crown Hill had been proposed, with water from the White River being pumped to a reservoir built on this highest point in the city, which would rely upon gravity for transportation of the water to the downtown. However, this plan never gained traction. Plans for the White River valley lake adjacent to Butler, discussed on this blog back in 2018, received a cool reception from the IWC due to the potential loss of the canal, and did not get off the ground. In 1920, the IWC requested a “small” rate increase from the Indiana Public Service Commission. Ads announcing this request appeared in local newspapers and also detailed the various improvements undertaken by the water company to help justify the increase. An ad in the Indianapolis News on November 20, 1920, referenced a possible reservoir, noting  stated the cost of a proposed reservoir to be $285,000 and that “[t]his heavy investment will mean protection to the public, but will not add to the revenues of the company.”

IWC had begun to explore the water supply and reservoir issue in earnest in the early 1920's, and one solution was a reservoir in the Fall Creek valley. Fall Creek, whose flow levels tended to decline significantly in warmer months, was in need of a consistent source of water to feed IWC facilities farther south, especially the station near present day Keystone and Fall Creek Parkway, adjacent to the State Fair Grounds. Like the idea for surface reservoir generally, a reservoir in the Fall Creek Valley was not new. On June 1, 1896, following an industrial spill in the White River, the News reported that William H. Woollen, local attorney, nature lover, and the namesake of Woollen Gardens, noted that potential water issues could be discussed in tandem with pending city park plans being discussed at the time, and “cited the Fall Creek region above Millersville. The creek winds among hills from where many springs flow. A two-mile stretch of hill and valley, extending up the creek and surrounded on all sides with highways, but with no tows to pollute the water would be available, he thinks, as a reservoir for water sufficient for the future needs of the city..."

An impounding reservoir would retain water and release it below the dam into Fall Creek when a higher flow was needed to supply IWC facilities farther downstream. Additionally, the reservoir would potentially help future flooding issues. In 1928, the IWC, under the local direction of its vice president Howard Morse, began to purchase land in the area surrounding Germantown, and in southeastern Hamilton, and northwest Hancock County. The maps in the slider below show the area where the reservoir was planned. The first map is from a 1889 Atlas of Indianapolis and Marion County. Note Germantown in the northeast corner. The second is from a 1938 Plat Book of Marion County, and while Germantown is still on the map, the IWC now owns a large portion of the land in the northeast corner of the county. The eventual dam for the reservoir was constructed northeast of the '20' section number in each map. 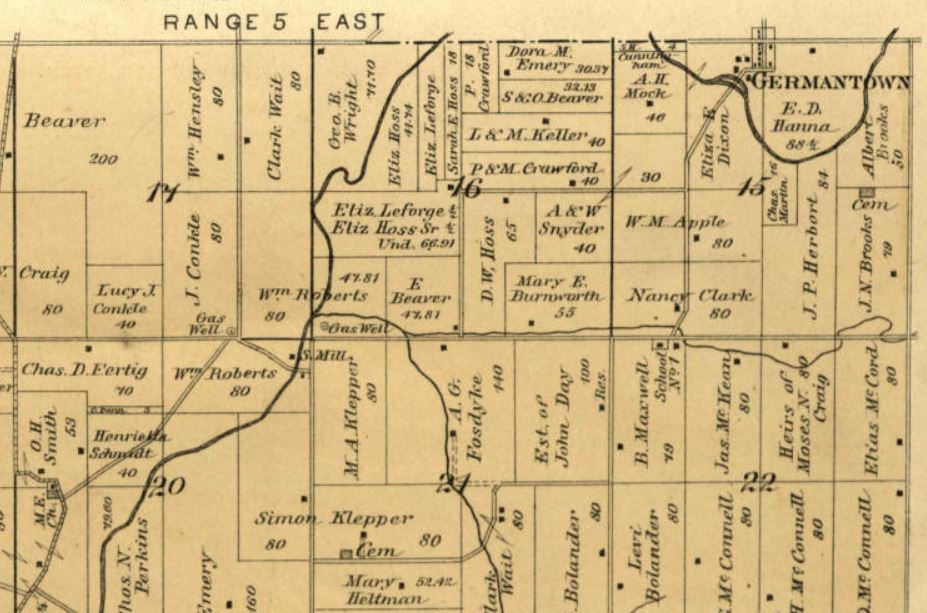 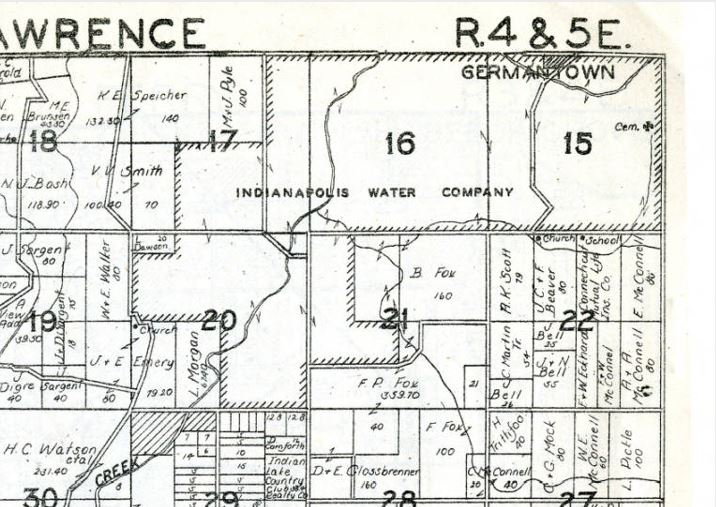 In 1931, topographical analysis and aerial surveys were conducted in the valley to identify the location for the reservoir, and most importantly, the dam. Test borings were completed in 1931-32, and land purchases continued. The dam site was selected at a point where the Fall Creek Valley narrowed, just downstream from Germantown. The elevation at base of the valley was 759 feet above sea level, and the IWC calculated the spillway part of the dam would need to be 26 feet above this.

The Great Depression resulted in a decrease in water demand in the early 1930’s and delayed the planned construction. It wasn’t for another decade, in 1941, that construction actually commenced on the massive dam. On March 31, 1941, the IWC presented plans for the reservoir to the Indiana Public Service Commission for their authorization to begin work. This was granted on April 19, 1941, followed shortly thereafter by approval from the Indianapolis Flood Board. Work officially started on May 26, 1941 with the clearing of the dam site and the initial foundational work.

Construction of the spillway structure. North is to the left. Credit: Indiana Historical Society, Bicentennial Collection

While the work on the dam was commenced, clearing of the almost 1,800 acres of land which would be inundated once the reservoir was filled was also begun. All property, including the former Germantown, had been obtained by the IWC, and their contractors cleared any buildings, fences, vegetation, and bridges.

The 1945 Journal of the American Water Works article, Design and Construction of Geist Reservoir, written by Claris Allen, an engineer with the IWC, described this process, including how the contractors removed debris, and filled wells and privy vaults. Of the land to be inundated, 535 acres ere wooded. The remainder was farmland or non-cultivated with scattered tree growth. Trees with commercial value were sold to commercial lumber dealers, while the remainder were burned. After the clearing of structures and vegetation, the valley was subject to a controlled burn “in order to reduce the vegetation taste of the newly stored water.” The images below are a detail from the Map Indy images discussed above, and show the extent of the clearing done on the land. Both images show the same location in the reservoir, including what appear to be the remains of foundations for the buildings in the 1937 image.

Four bridges were in the inundation zone. These were disassembled, “matched marked,” and returned to the local highway departments. The Roberts Covered Bridge was one of these bridges, built in 1881 or 1886 (sources vary) by William Roberts, and was located a short distance upstream from the dam. The photos below first show the bridge prior to the clearing done for the reservoir (left), and the second likely after the clearing of vegetation had been completed, but prior to the removal of the bridge, probably in late 1942 (both photos from the Indiana Historical Society's Bicenntenial Collection).

Progress on the dam continued, and on August 6, 1942, Fall Creek was diverted from the creek bed and into outlet piping built into the dam. This allowed the final portion of the spillway to be completed. However, the outlet piping could only handle a finite amount of water, and in December of 1942 heavy rains resulted in a higher stream flow which pushed the creek beyond the capacity of the outlet piping, and the reservoir began to fill. Bridge removal was still ongoing, so crews had to race the rising water. However, by the end of the month this task was completed, the outlet pipes were closed, and the reservoir began to fill in earnest. The 1943 annual report for the IWC noted that the reservoir was filled to capacity for the first time on March 17, 1943.

Following its completion, the reservoir was formally named Geist, after the now deceased president of the IWC, Clarence Geist (previously the reservoir was referred to as the Fall Creek or Oaklandon Reservoir) who had died in 1938. Geist was kept in a mostly natural state following its completion. In an article written in 1957, Vice President of the IWC, Daniel Morse (son of Howard Morse) discussed the views of the IWC on development of the reservoir, and noted that even before Geist was completed, the Indiana Department of Conservation wanted to use the reservoir and surrounding land for a state park. However, the IWC declined this request, wanting instead to maintain “unhindered control over the water supply.”

There was commercial interest in the lake at the same time, including from a developer who wanted to construct a lakeside resort, complete with a “floating dance palace.” However, the developer lost interest when informed that the water level would not be constant, and demand could result in the water level dropping down close to the original creek channel. Another entrepreneur wanted to operate a sea plane charter on the reservoir, although this was declined.

The location of the reservoir, well north of Indianapolis, and away from any other sizeable communities, as well as World War II, limited recreational and development interest in Geist throughout the 1940’s. Fishing from shore was allowed (watercraft were banned, primarily due to liability issues), and the IWC developed several picnic areas around the reservoir, which Morse noted provided good public relations for the utility. The boating ban was lifted in 1953 when the IWC allowed a vendor to open a dock where watercraft could be rented for fishing. Around 1955, a sailing club was also opened. The map below (contained in the Indianapolis Library's digital collections), is likely from the late 1950's after the dock and sailing club were opened.

Sale of land along the reservoir for development was not permitted due to sanitation concerns (although Morse described in his 1957 article that these concerns were “psychological,” presumably since the water would still be treated downstream), and because there was a desire to allow public access to the entirety of the reservoir’s shoreline. Also, the IWC believed that would-be homeowners would not appreciate the appearance and smell resulting from periods of low water on the reservoir. However, within a few years this policy would change with the creation of the Shorewood Corporation, which would be the beginning of significant changes in and around the reservoir in the coming decades.

History of Geist Reservoir and Germantown, http://oaklandon.deburger.com/stories/History_of_Geist_Reservoir_and_Germantown.pdf (detailed review of the history of Lawrence Township and includes photos of Germantown and some of its residents.)

Past and Present: Intersection of the Central Canal and Washington Street

A Direful Scourge: The 1849 Cholera Epidemic in Indianapolis

The Bridges of Fairview & Butler